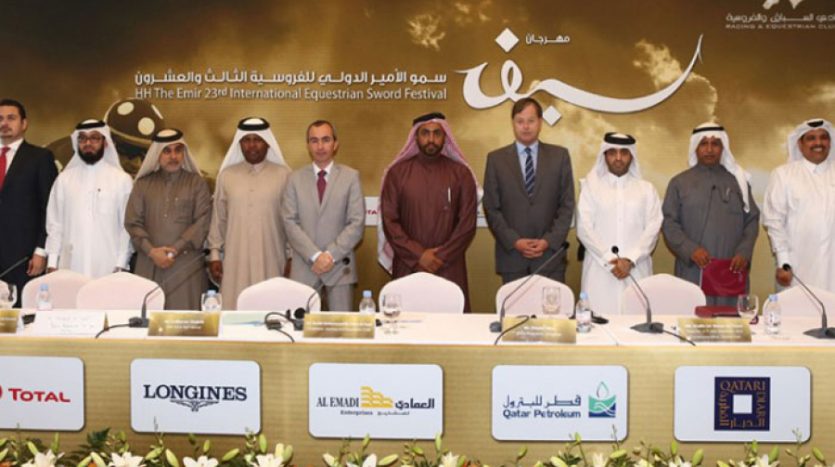 Under the patronage of HH Sheikh Tamin Bin Hamad Al-Thani, the Emir of the State of Qatar.

the official programme for HH The Emir 23rd International Equestrian Sword Festival was formally announced at a press conference staged in the presence of QREC Chairman HE Sheikh Mohamad Bin Faleh Al-Thani on 10 February 2014.

During the press conference, Sheikh Mohammed also launched the new logos for the QIEF and Qatar Racing and Equestrian Club (QREC). “We have adapted new logos, which come along with new strategies and facilitates, promoting the equestrian sport in a much larger scale. I must thank Al Kass for providing us with the wonderful poster for the promotion of QIEF and also the new logo for QREC.”

The eight-day event, which begins on Thursday, 20 February, culminates in the running of the HH The Emir Trophy and Sword Race Meeting one week later and will encompass the region’s most expansive celebration of the Arabian horse.

Members of two globally recognised bodies within the sport will be among approximately 400 international visitors to QIEF 2014 when the European Conference of Arab Horse Organisations (ECAHO) and the International Federation of Arabian Horse Racing Authorities (IFAHR) will both use the occasion to stage Annual General Meetings.

Following the visit, racing gets underway at 1.30 p.m. at Al Rayyan when the nine-race card features three valuable Cup events; the Gulf Cup, Al Rayyan Cup and the Qatar 2022 Invitation Cup, a Group 3 event for Thoroughbreds.

There will be an opportunity to meet leading trainers and jockeys at a breakfast event on Wednesday morning before the start of the nine-race card featuring the Group 1 Qatar International Trophy.

The highlight of the Festival, HH The Emir’s Trophies and Sword Race Meeting, gets underway at 1.30 p.m. on Thursday, 27th and features races at the highest level for both Pure Bred Arabians and Thoroughbreds.

“The Festival provides us with the opportunity to welcome people from all over the world who share our passion for the equestrian sport and we look forward to forging new relationships and renewing many friendships at what promises to be our most exciting event to date”, added QREC Chairman.

An opening ceremony heralding the start of the Festival will be hosted by the international racing personality, Derek Thompson, who will return to present all three days of racing to provide an informative insight and enhance the visitor experience for racegoers at Al Rayyan.

Sami Jassim Al Boenain, QREC General Manager said, “We are extremely grateful to all our supporters and especially our headline sponsors whose involvement helps us to maintain the prestige of this wonderful celebration of the horse”.

“HH The Emir International Equestrian Sword Festival continues to grow in stature and in value and we are delighted to announce that for the first time this year prize money will reach a record level of QR 25 million (Euros 5 million).”